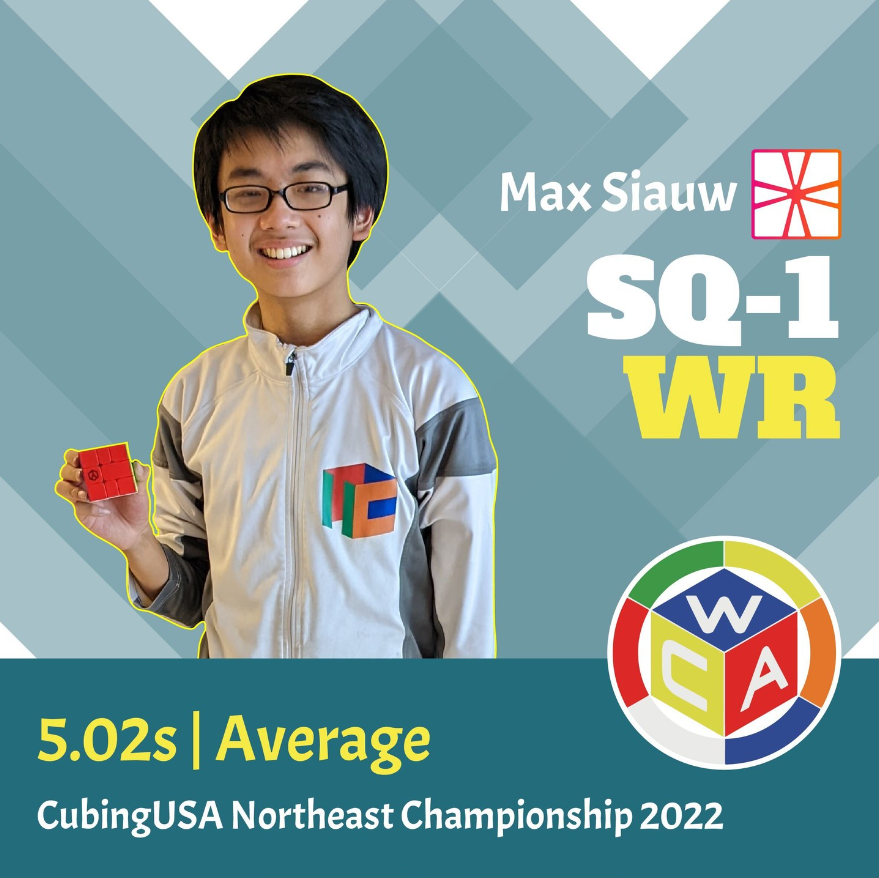 Note: This post is pinned to the top of my blog.

I’m officially a world record holder! This past weekend, I had the opportunity to attend the CubingUSA Northeast Championship in Boston, Massachusetts. There, I broke the world record in Square-1 with a 5.02 average, beating the previous record (6.06) by over an entire second (the last time the record was beaten by over a second was in 2014).

Ever since my 6.37 North American record back in July, I realized that I was capable of going one step further and becoming first in the world. I was only 0.03 seconds off the world record at the time, so I figured it would easily come with a few competitions.

I was terribly mistaken. Since then, I’ve been to 18 competitions at which I’ve faced more setbacks than I knew possible. From +2s and E1s to mis-scrambles, I was getting hit with all these curveballs that steered me clear of the world record title for what felt like an eternity.

But finally, on Sunday, May 29, 2022, I got a 5.82 world record average, becoming the first person ever to break the sub-6 barrier. But this result was overshadowed when, later that day, I broke it yet again with a 5.02 average.

I feel that the 5.82 average is evidence of the substantial mental barrier I had to crack in order to fulfill my dream of a world record. After that first record, it felt like an immense weight had been lifted off my shoulders so that I went into the next round with a much more optimistic mindset. That is why I believe I was able to obliterate the 5.82 with the 5.02 average in the next round.

Even days later, I’m just beginning to process how much of a journey this has been for me. After all the disappointments and misfortunes, I’ve finally crushed my goal. And I did it not once, but twice in the same day.

It took some skill. It took some luck. But in the end, it was more of a mental game than anything. The past few months have taught me how to rebound from setbacks with even more momentum than I had before. I genuinely feel that the motivation and encouragement I’ve received from my friends and family has been the most important factor in my record. The video of my first record (the 5.82) speaks for itself in that I have friends who want me to succeed and are willing to support me in that as much as they can. They have helped me persevere and continue to give it my all.

I couldn’t be more grateful about my recent results. Here’s to many more records in the future 😉