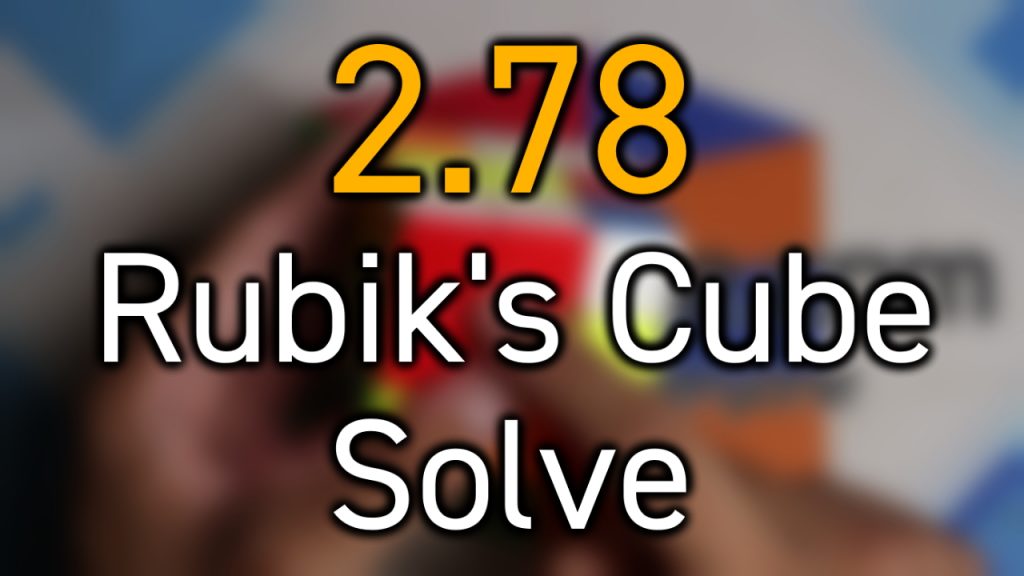 Three years ago, I stumbled across a video by WIRED asserting that it’s nearly impossible to solve a Rubik’s Cube in under 3 seconds. At the time, my best ever Rubik’s Cube solve (outside of a competition) was just above four seconds, meaning I would have to shave off an entire 25% of my time to get sub-3. Thus, I said to myself that WIRED was right and that I would never break the sub-3 barrier.

After that, I was able to lower my personal best down to 3.71, which obviously is closer to the sub-3 barrier, but still incredibly far away.

Then yesterday happened. Somehow, I was able to beat my 3.71 by almost an entire second with a 2.78 second solve. I yelled in exhileration as experienced a twofold increase in my heart rate.

Click here for a visual reconstruction of the solve

As much as I hate to admit it, this is not a consequence of pure skill and talent on my part, but probably the biggest fluke of my entire life.

The cube is solved in four steps:

On my solve, I miraculously managed to skip not only the third step, OLL, but also the fourth, PLL. The odds of this happening are only 1 in 15,552. In other words, if you were to do 15,552 solves (most people don’t even do this many in a year), this is expected to happen to you only once.

An average speedsolve usually takes around 60 moves. The best of the best cubers can be efficient enough to average around 50 moves. But my solve? 21 moves. This solve required only 1/3 as many moves as an average solve. I’m not too sure on how the statistics would look on this one, but I know for sure that 21 is a ridiculously low movecount.

To put this into perspective, consider the Fewest Moves Challenge (FMC), an event where competitors have an entire hour dedicated to finding the fewest number of moves needed to solve a given scramble. If I were to compete in FMC and get a 21 move solution, I would be placed top 38 in the world. But I did this in a speed solve, where I have only 15 seconds to plan out my solution.

I also made a community post on my YouTube channel, telling them nothing more than “I got a fast solve recently. What do you think the time was? How many moves do you think the solution was?”

Almost every person guessed that the movecount was somewhere the 30s, not the 20s, because a movecount in the 30s is already more than enough to be considered lucky.

I hope that sheds some light on how lucky yet amazing this solve was!